Thoughts on Rania, New Sexy Girl Group on the Block 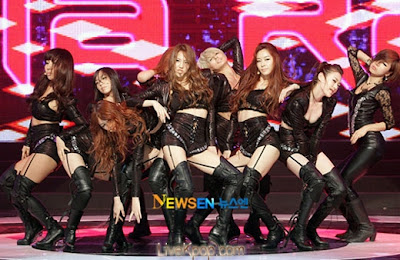 I debated for a long time about writing about this girl group, but as the month comes to a close, I figured I'd add my voice to the slowly fading banter surrounding this girl group on the interwebz.

For those of you not familiar with the group or the media frenzy surrounding their debut, check out their posts on allkpop. To summarize: Rania, an international girl group who have been buzzed about for about a year and had worked with Teddy Riley on their debut single, finally stepped onto the scene with their song, "Dr. Feel Good". Check out the video and live performance below:

The noise on the internet has mainly been about their sexy stage performances and lyrics. The Korean entertainment industry has not taken kindly to this bold expression of female sexuality, and the group has encountered numerous roadblocks in their live TV promotions: they've been forced to change their choreography, lyrics and stage outfits, and have also been lambasted by audiences for being too raunchy. There also have been strong voices on the other side of the argument supporting the girl's expression of their sexuality, most notably this great op-ed on allkpop.

So after viewing all the evidence and hearing both sides, I've finally come to a place where I feel like I can adequately express my opinions of this group. I tried before but ended up saying more than I meant and possibly giving the wrong impression of where I stand. To be very clear, I support this group. I think they are very talented women with great stage presence and fantastic voices. And I support their choice to express their sexuality any way they see fit in their music. However, I'm not a fan of their music (yet) because it's a little dull for me. The production is great, especially in the Korean version of Dr. Feel Good, but the instrumental leaves a little to be desired. Also, I'm not particularly a fan of the song's lyrics. Frankly, I'd like a little more substance than that in my pop music, thank you very much. Lust as a stand-alone concept doesn't do much for me.

That's my opinion on them, but there's still a lot more to talk about with this group. First of all, let's make one thing clear: these women are performing sexual liberation - that is, this is the image we see on stage, but it's not the real image of the women themselves. Why do I say this? Well, this is a Korean pop group. As a group within that system, especially a rookie group, they lack autonomy over the material and image they put out. I've talked about this before, and recent studies have shown that young female pop stars are often forced by their management to wear revealing clothes and perform suggestive dances.  Some girls own it, but not all of them do. It's the same for guys too - notice how Joon from MBLAQ started out as the ab-bearer - taking after his hyung, Rain, no doubt - but has recently become a lot less keen to show some skin. But we, as viewers, can't really tell, because they do a good job of convincing us that they are all naturally sex symbols.

Their sexy image is then in conflict with the image they put out in interviews: according to this interview, they don't think their promotions are sexually suggestive at all. I have only one reaction for that - O_O. One would think that for all their CEO's ranting and Teddy Riley's disappointment, he'd have them be like "Yeah, we're sexy - so what?" - have them own it like After School or Brown Eyed Girls. But no, they're like "How is it suggestive?" Garter belts and hip-thrusts? Really? You'd need to be from a different planet to not connect those things with sex. It reminds me of So Nyu Shi Dae insisting that there's nothing sexy about them, while parading around in hot pants and high heels. *sigh.

Taking all this into perspective, I'd be naive to think that Rania's sexy concept is put out there to empower women. It's obvious to anyone familiar with k-pop that DR Media is simply taking advantage of k-pop audience's fandom of sexy men and women - whether or not they are explicitly sexy, or admit that their performances or songs have sexual undertones - and just pushing the envelope a teensy bit. They're selling sex just like everyone else. The fact that they're being maligned for it exposes double standards at work, but it's not like they're feminists or anything. They're just like any other pop group trying to make it in the industry, giving the people what they want - whether either side admits it or not.


More dangerous than the existence of double standards, though, is the reluctance to talk frankly about the use of sexual imagery in Korean pop music frankly in any context. Without those conversations, men and women will continue to be put in positions they're not comfortable in, and won't be able to say anything about it because their management will outrightly deny that there's anything sexual about it, and the public will malign them if they do. So in the words of Salt N Pepa - let's talk about sex, Korea! Get it out there and deal with it. It will make things better in the long run.
Labels: girl groups korea korean music rania sexiness