Block B: The View From the Stoop 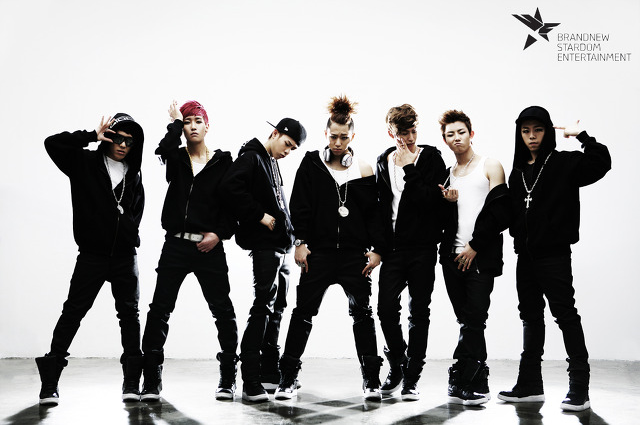 While catching up on all the k-pop news, releases and gossip today, I realized that about six new idol groups have debuted this year alone, and what's more, there are at least three more on the way. People have already complained that market for idol groups is saturated - soon they'll be leaking out the ears with groups to perform. I'm interested to see the economic repercussions this influx of new groups will have on the idol industry, and what the companies (and possibly KEPA) will do to change it, but more on that later. I'm up late typing tonight because one rookie group has finally made an impression on me, and that's hip-hop boyband Block B.

Composed of seven members - two rappers, three vocalists and two sub-vocalists - this group came onto the k-pop scene with a ridiculous amount of hype surrounding them. They make their own music, they're going to be a real hip-hop group (for k-pop this is a big deal), they have experience as underground rappers, they're sick dancers, etc etc etc.  All of this along with the association with Cho PD, a huge name in the Korean hip-hop scene, meant expectations were high when this group's debut EP, do u wanna B? finally dropped this week. Here's their lead single, "Freeze" or "그대로 멈춰라!":

The video has the music mixed weirdly for some reason, so you can give the track a proper listen here:

Now, when they said hip-hop, I was not expecting this electro-pop on my speakers. When you say, hip-hop, it has to be hip-hop. Not k-pop with rapping. That being said, dayum, these rappers are good. Zico, the one with the afro-puff mohawk, immediately stood out to me (I think he's the leader) - he's got MAD flow. The other rapper, Park Kyung is pretty good too. This song feels weird because it's obvious that their strength lies in those two and Tae-il, the one who sings the pre-chorus bridge, but they give up a lot of time to the other vocalists and the subs, who are good but not mind-blowing. They're built to be a group whose music centers on rapping, but they have to use their vocals more because the market currently favors pop over hip-hop - and by extension vocalists over rappers.

Good thing for us hip-hop heads, they provide us with two other tracks on the album that tell us, yes, we're actually a hip-hop group. If you want to introduce an under-appreciated genre of music into the k-pop scene, this is how you do it - put out a poppy single, with additional songs more true to your style attached. (CN Blue, FT Island: take note). "Wanna B" ditches the synths for a grittier sound, and rap takes over. This is more the kind of song you'd expect from a hip-hop group, and from what I've read in blog comments, people seem to prefer this over "Freeze":

They then tone it down and throw in a dash of soul for "나만 이런거야?". I grew up in the golden age of rap-sung collabos, so this hits all the right notes for me:

I actually really like this EP. It's unusual for a k-pop boy band to have such a strong hip-hop influence, so this stands out for me among the fifty million k-pop tracks being released every month. Most other bands are either more pop than hip-hop, or they leave the real hip-hop for solo releases or sub-units. Here, however, hip-hop defines them. In that sense, they're most similar to Dalmatian and Big Bang in terms of musical style: Hip-hop is an essential part of their identity as a group, and even when it's pop-ified, it's still very present in their music.

Another reason why I like this EP - the production is NICE. When I heard that two of the group members basically singlehandedly produced it, I was pretty impressed. "Freeze" starts out basic, but as it progresses it gets really good. It has this gloss which just makes it a fantastic listen, especially on the right headphones/speakers. That smooth production also makes the hip-hop tracks an easier listen for ears unaccustomed to the style.

Their stage performance on Music Bank pretty good too. They have good stage presence and definitely give their all in their performances, which is all you can really ask of for a rookie group. It may not be as amazing as one might have expected, given the hype surrounding their debut, but in reality that hype was completely blown out of proportion. I can think of only a couple of veteran k-pop groups who could live up to that kind of hype, and even then the pressure would be on. Even with stupidly high expectations, though, these boys manage to impress. I give Block B two big thumbs up - solid debut, possibly the best of the new idol groups this year.
Labels: block b hip-hop k-pop korean music