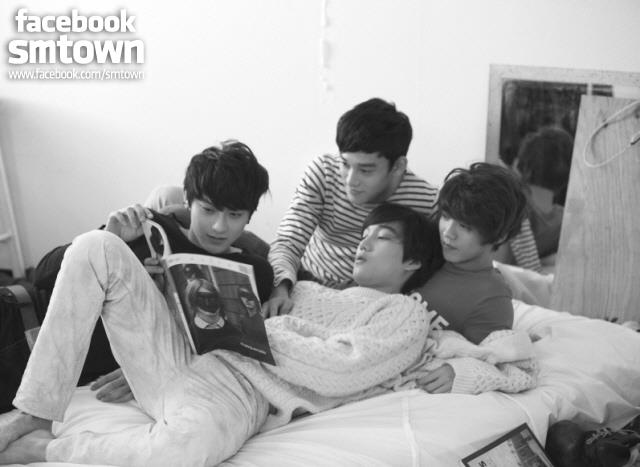 Ah, finally - a relevant SM topic to write about. I've been itching to write about everyone's favorite entertainment company for the past two or three months, but I didn't want to bore you guys with old news about SNSD. So now I'm turning my attention to their newest group, EXO.

Right off the bat, these guys caught my attention. SM poured their money into their teasers, and for once, it was money well spent. The boys look good, sound good, and are singing, dancing, and staring meaningfully to some phat beats. It's clear that SM wants these guys to be a success, and I'm liking what they're doing with them so far. My favorite teaser is the first Kai one, for a few reasons: (a) he's kinda hot (new noona crush?); (b) I love his dance style; and (c) The song, "My Lady" slays me every time I hear it. I suspect that's Jino singing - I'm just waiting for his teaser so I can make him my bias and leave all these other dudes in the dust.

(People have been hating on Kai's many teasers - I guess he's the leader? It'd be annoying if he wasn't the leader, though, and just the chosen one, like Yoona.)

A big topic over at Seoulbeats has been the unique marketing strategy for this group: made up of twelve Chinese and Korean performers, they will be split into sub-groups, EXO-K and EXO-M to promote simultaneously in Korea and China. They will be singing the same songs, only on different languages. Some have called this strategy genius: I call it poorly thought out. The marketing that's been done so far seems to indicate that they're thinking more strategically about this debut - unlike f(x) who were kind of just thrown onto the scene with a smorgasbord concept that they haven't quite figured out yet, and no directed marketing beforehand. However, I've learned not to get my hopes up when it comes to this company. People have already pointed out the fact that k-pop hasn't gotten hold of the mainland Chinese market just yet, so EXO-M might not do as well as EXO-K. They've also been throwing SNSD onto every continent with mixes featuring a random mix of American talents, which just seems lazy to me. Without a good picture of the foreign market and what they're willing to pay for, they're unlikely to capture the market the way they want to. SM may say that they don't want world domination, but they're making moves that only support that assertion. Probably don't want to be embarrassed when they flop.

Regarding China though, I think there may be a chance for them. If EXO-M can market itself to the younger generations who listen to rock bands instead of the dreary pop ballad singers, and position themselves as a group that plans to change the status quo as opposed to fitting into it (which is what SM tried with no success in China and in the US) then maybe they have a chance. I wonder how they'll deal with censorship though - they probably don't have Chinese TV broadcasters in their back pocket like they do the Korean ones, so they have to be careful about content. Oh well, if it fails, at least Taiwan will take them.


Anyway, this all looks good, but I'm not confident that SM can deliver the way they are suggesting they will. Here's why: they kind of just do stuff. They don't put much thought into their actions, but simply put out albums and flash their cash for the world to see. This is my main beef with SM, aside from their restrictive contracts and questionable marketing of SNSD. Occasionally you see growth in their artists, but in those cases I would give credit to the hard work of the individuals as opposed to the company's philosophy as a whole, which essentially boils down to "F**k bitches, get money." Release albums with lackluster songs, collect the profits from a rabid fanbase, and then turn around and do it again with the next group the next month. Cycle through the artists and simply wait for the cash to fall into your pocket.

Clearly this is working for them, so I won't knock it too much. However, apart from the possible human rights violations being committed in order to get these albums out so quickly, as a music fan it leaves me disappointed. SM is fantastic at picking out the most talented people the world has to offer. Yet they seem incapable of producing consistently good music. Huge amounts of talent are being wasted over there, shafted to occasional special performances, or the off chance that someone actually knows what good music is and works with the artists to help them get a glimpse of their full potential. So while it looks like someone actually cares about the music this time, I plan on remaining detached from this new group, because I will be let down, as usual.


To be honest, I think EXO is simply a replacement for Super Junior. Down to nine members, which will soon decrease to eight as Leeteuk approaches the age of army enlistment, SM needs another super boy band to keep the fangirls emptying their pockets for merchandise and concert tickets. So far, it seems like the k-pop world is ready to accept EXO as their new deities once they land on Earth. Maybe if we're lucky, they bring with them some awesome music from their planet.