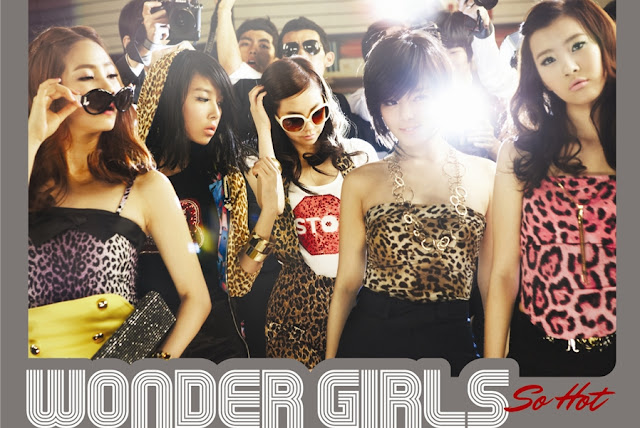 *EDIT: Feb 11, 12:09AM - changed the last paragraph so it would be slightly more relevant to the topic. Hopefully it makes more sense now.

(Composed primarily from 1:38am to 3:25am this morning. Apologies for lapses in logic.)

Hello, world. It's 1:38am and I really should be asleep, but I always think of fun stuff right before I go to bed. So here I am, with a theory to propose to you: Most South Korean girl group concepts since 2007 have been determined by the Wonder Girls. I know this is a huge stretch, but hey, no use coming up with a theory that won't be contested, right? So read on and see if you agree or think I'm making it all up. Here we go! (Bud Light. Ha.)

So here's the story: I was randomly watching 4minute videos, and slowly accepting that they don't suck all that much (though they could still make MUCH better music). I watched live performances of "Muzik" and "HUH", and noted how much more confident and interesting the girls have become since their debut days. I still have issues with their largely oversexed image, but it would seem that they're slowly growing into it, which leads to me taking less issue with the whole thing. Granted, it's still highly questionable whether they identify at all with the image that they project on stage, but it's a lot more believable to me now. Either that, or I've drank too much of the 4minute Kool-Aid. Who knows.

ANYWAY, during these musings I thought to myself, back in the day, Hyuna stood out a lot more on stage. It was essentially the Jiyoon and Hyuna show, since Jihyun wasn't doing many sexy waves, Sohyun was kinda awkward and Gayoon couldn't control her voice. I guessed that Hyuna's confidence on stage was because of her time with the Wonder Girls before joining 4minute. I then looked up Hyuna-WG performances and noted that in those days, the Wonder Girls killed it on stage. They looked like they were having fun, they put all their energy into their choreo, they OWNED their performances. I'm specifically referring to their debut hip-hop-flavored single, "Irony." It was weird to see a performance where Hyuna didn't draw all the attention, but blended in with the rest of the group. Also, her raps were so much more appealing in WG! Cube Ent. seems insistent on having her yell out every line, and it's really not fun to listen to. She should take some tips from her replacement, Yubin, and tone it the hell down. Dang.

Sadly I realized that this was the beginning of what I consider a downward spiral for the Wonder Girls. While I felt "Tell Me" despite being cute still had some of the sass and energy of "Irony", everything else felt so much less interesting to me. Even "Nobody", which was my introduction to WG, didn't hold my attention as much as "Irony", especially in the live performances. In fact, today's Hyuna would pretty much kill the rest of WG on stage, even if they were doing the same choreo.

It was then that I had my epiphany. My moment of genius is largely attributed to my comment conversation with compliant on McRoth's blog over the significance of Girls' Generation's "Gee' in the k-pop world.* They managed to convince me that "Gee" was basically SM's version of "Tell Me". So, building on this, I checked out Wikipedia's account of the histories of k-pop groups, and discovered that basically whatever any girl group did from 2007 onwards, Wonder Girls did first. They brought sexy back, or made it more palatable for sensors. Their cute hit spawned the cute wave that choked k-pop in the late 2000's. I'm willing to bet that they were one of the first of the late 2000-era kpop girl groups to have a female rapper included. You can look at the histories of all your favorite girl groups: whatever trend was there, Wonder Girls did it first. There are, of course, exceptions to this rule - 2NE1, After School, Brown Eyed Girls and 4minute - but notice that these groups are always the exception. No matter what's going on in k-pop at the moment, they're doing something different, which is what makes them stand out from the myriad girl groups that exist. It's the other groups that try to do what has been tried and tested that end up becoming copycats (more on this later).

Check out the style this performance of SNSD's "Into the New World" - look familiar?

Now, by no means do I think that this is some sort of all-encompassing theory. The "dark concept" which was all the rage last year didn't come from WG. If anything, it was more likely an idol rendering of the already present tendency towards less-happy storylines and ideas in music videos. Also, Girls Generation were doing cute stuff before "Gee", though it's important to remember that their first two singles had a distinctly different brand of cute - it was energetic and lively, as opposed to bubblegum and toned down (and uber-colorful). But the Wonder Girls seem to have set a lot of the trends. I think this is one of the reasons why they're still so popular, despite barely promoting their music in Korea in the last year and a half, and despite their music and performances taking a dive into the "average" realm. In fact, girl group performances as a whole have a lot less energy than they used to. You only need to look at CSJH The Grace or S.E.S and then compare them to basically any current girl group to see the difference in the feeling that's projected onstage. The choreo became simpler, the high heels got higher, and the vocals weren't as strong or interesting. (I suspect the weight requirements got lower too.) I know I'm an incurable 2NE1 stan, but you gotta admit the girls bring the energy every time: the choreo and the vocals are pumped up, and that makes their live stages that much more enjoyable. KARA too - it's one of the reasons I like them as much as I do, and dislike the toned down/ girlified Japanese version of them.

As to why we see this particular trend, it's probably because at the time the Wonder Girls came on the scene, there were few pop girl groups promoting their music on live stages and TV. The Brown Eyed Girls and CSJH the Grace were the only other mainstream pop girl groups that were active around the time they debuted, and CSJH left Korea to promote in Japan not long after "Tell Me" came out. All the old school girl-groups like Fin-K.L, Baby Vox, Chakra, and S.E.S had long since disbanded. Jewelry was on hiatus, and didn't return till 2008, by which time the Wonder Girls had already established their grip on the k-pop scene. JYP is great at finding formulas that work. Songwriting skills aside, this is the main reason why JYP is as successful and as renowned as he is, and why his entertainment company continues to rule the k-pop world (at least, the part that doesn't belong to YG or SM).

In the end, the killer of good pop music is formula. Granted, formula is what pop music is built on, because at the end, you need to figure out the baseline qualities that make songs appeal to the masses. But when it becomes too formulaic, it loses its appeal: every song that comes out now seems like a revamped version of an earlier one. And I think this is the source of all the complaints aimed at k-pop that have been floating around recently.. Granted, the comfort of formula makes buying music less of a struggle for consumers as it's easy to find something they like. It also saves music companies money in production, and earns them more money in sales. But, for someone like me, it removes from the music the very aspect that draws me to it, and it stops artists from evolving, innovating and creating those mega-hits they're all aiming for. To me, part of the beauty of music is in the experience of listening to a song you've never heard before, or watching a performance or music video you haven't seen, and the unique enjoyment you take away from it in that moment because it's new to you.

So to conclude, here's a lesson everyone can take home from this: Nothing is original, as they say, but that doesn't mean you shouldn't experiment and try to be different. Experimentation brought Christina Aguilera to arguably her best album, "Back to Basics". It extended Madonna's career to about twice its predicted life-span. It brought Robert Plant back to the music scene at a time when Led Zeppelin was becoming an unfamiliar name in pop culture. And it continues to make people discover new things and reach more people. So don't be afraid to color outside the lines - the world will be better for it.

And we're done. Hate it or love it in the comments.